Rejecting the ‘politics of respectability’

Ushering in a new era for the youth

It’s a night out with my girls. We’re having a great time, catching up, living and vibing out to Saweetie’s Tap In. I record our rapping along to the part which states “lil waist, fat a**, b**** tap in.” I log on to Instagram, ready to share with the world what a great time I’m having. Instead of clicking the green button to share, I second-guess what I’m about to put out and decide against it. I decide that it doesn’t add significant value to the world, that it promotes alcoholism and recklessness, but more importantly, that it’s not “inspiring.”

Disappointingly, I end up making the decision to self-censor not only because the content is “not of substance,” but also because I don’t know how to explain why I enjoy music about women who love money and themselves. The self-policing which I am constantly fighting is rooted in the idea that, as a “promising young woman,” my best bet is to package myself as a one-dimensional flat character with no particularly colourful personality traits. To package myself as having little to no sexual prowess, no power ambitions, no roughness, no flaws, no mindless interests like partying and essentially, no fullness. Luckily, I get to draw from the strength of young women who are increasingly proud of their dynamic fullness. That is, to outdated and constricting notions of respectability, young women have said, “no more”.

Young people and specifically young women all over the world are increasingly rejecting the politics of respectability: the notion that there are specific, acceptable forms of expression which are necessary in order for one to send the message that they are decent, noble and/or respectable.

More specifically, the politics of respectability is usually and primarily applied to women. It speaks to the self-censoring which occurs in the pursuit to “be taken more seriously” in the world. Ordinarily, it means refraining from sharing sexually explicit content, or content which alludes to alcohol, drugs or anything else which is deemed “uncultured” or “unrefined.” In essence, respectability politics serves to gag the fullness of our humanity. It compels us to trade our fullness for “respect.”

In recent years, young women have become actively engaged in the deconstruction of the restrictive parameters which constitute desirable respectability. The pushback by young women against emulations of one-dimensionality has various manifestations. It is most present in music and other works of art and cultural expression. Perhaps the best case study of defiance of respectability is the famous hit “WAP” by American rap stars Meg Thee Stallion and Cardi B. The track, which begins with “certified freak, 7 days a week, wet a** p***y, make that pullout game weak,” has become a crucial tool in the rebellion against the modesty which women are often encouraged to embody.

Inviting great uproar, the track opens up a wider conversation not only about respectability politics, but also about why the standards of respectability are generally different for men and women. That is, it begs the question as to why there is a widespread acceptance of generally explicit language by male artists, like Ty Dolla Sign’s “You can ride my face until you’re drippin’ cum” in his track Or Nah, or Pop Smoke’s “Every time I f***, she call me daddy. My lil’ mama nasty I see the p**** through the panties,” in his hit Mood Swings, but God forbid two black, grown women acknowledge their reproductive and sexual freedom. WAP has been referred to as setting a bad example for young women and as “sheer savagery.” Effectively, to many, it has rendered the black, female artists as less worthy of respect.

Importantly, aspirations at respectability are generally more common among black women. The hyper-sexualization of black women has resulted in the excessive collective attempt to constantly prove that we are respectable. The policing which characterises the respectability politics of women is informed by a distinct form of misogyny which loudly implies that “a sexual” woman is mutually and fundamentally exclusive from an intelligent woman. To that effect, young women are increasingly using their bodies as weapons to fight respectability and deconstruct the notion altogether.

For example, Chloe Bailey, actress and singer, was one of the most recent victims of policing attempts rooted in respectability. Bailey, who was attacked on social media after posting sexually explicit content, responded to internet trolls by sharing even more explicit content. That, ladies and gentlemen, is how you take out the trash! Chloe, like most young women, is actively reclaiming her power, taking ownership of her body and speaking truth to the power of age-old notions of respectability.

In conclusion, both young men and women are taking to social media to revolutionise dialogue and its accompanying methodology. Young people are increasingly dismissive of the ceremonious formalities which generally characterise dialogue as introduced to us by preceding generations. Using the immediacy which characterizes the fundamental nature of social media platforms, young people are “@ing” public leaders and speaking truth to power on a regular, sustained basis. They are defying the norms of communication as necessarily synonymous with norms of respectability.

In Namibia, young people are twerking in front of police officers at protests while shouting “do your job or lose your job.” At surface level, in a post-conflict society with deep-rooted and bizarre social power dynamics, the action is “disrespectful.” To young people, it’s a powerful way of blurring the lines which often interfere with substantial and transparent discourse. Young people are consciously disregarding social embellishments in the form of “civilized” etiquette. The action speaks loudly to the fact that young people, in Namibia and beyond, are perceptive and firm in their rejection of potentially blinding respectability politics.

Importantly, the solution is not to reject that discourse should be respectful. However, the solution is to invent a kind of discourse which doesn’t require the resignation of individual fullness to be deemed as worthy of having something meaningful to contribute to the world.

Bertha Tobias is a 20-year old International Relations and Economics undergraduate student. She currently serves as Namibia’s Youth Charter Representative for the Office of the African Union Youth Envoy. A fellow of the Apolitical Academy, she has served at the frontlines of #ShutItAllDown, a Namibian national protest movement against sexual violence with an estimated combined social and non-social reach of 11 million. Her youth professional development programme has been awarded the Go Make A Difference grant. Find her at @BerthaJTobias 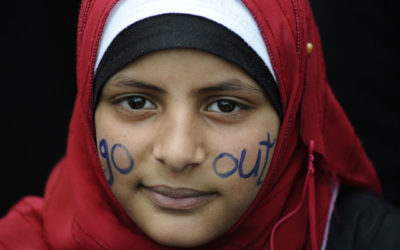 by Naseem Tarawnah From Morocco to Egypt, authorities in North Africa have increasingly cracked down on legitimate criticism on social media platforms in recent years. Wielding vaguely-worded laws, governments have suppressed free expression under various pretexts,...