From Morocco to Egypt, authorities in North Africa have increasingly cracked down on legitimate criticism on social media platforms in recent years. Wielding vaguely-worded laws, governments have suppressed free expression under various pretexts, including most recently, the COVID-19 pandemic.

In the ten years since Tunisia’s Jasmine Revolution sparked a wave of uprisings across the region, the state of online free expression has eroded as governments exercise increased dominance over the online civic space.

Yes, the majority of the region is online, engaging in critical discussions, sharing vital information, and utilising social media platforms that are shaping social movements. Yet, authorities throughout North Africa continue to actively undermine this progress by employing a myriad of pretexts – most recently of which has been the global pandemic – to strangle online free expression by introducing vague laws governing online free speech and fuelling a toxic online environment.

For voicing criticisms or simply publishing content, netizens face a climate prone to networks of trolls, bots, and sockpuppets that smear them and subvert their movements, and authorities that monitor content and engage in surveillance of critics. Women are particularly targeted by smear campaigns, as are members of the LGBTQ community who face real-life threats after being ‘outed’ online.

The years following the emergence of the Arab Uprisings, which apart from Morocco, managed to topple regimes in Tunisia, Libya, Egypt, and Algeria – the online civic space has become the primary arena for free expression in the region, and subsequently a battleground for control by authorities unable to tame the public discourse using conventional means.

While the pandemic has drawn attention to the need to address the growing vacuum of disinformation in the interest of public safety, activists and rights groups have argued that it is under this guise that authorities in the region have most recently wielded emergency powers to crack down on a wide range of dissent or online content that challenges authorities and societal norms. Indeed, the pandemic has seen long-running attempts to stifle free expression intensifying, with governments capitalizing on the crisis to introduce oppressive laws governing the online civic space.

In Morocco, students, artists, citizen journalists, and social media users have been prosecuted under the country’s stricter penal code, antiterrorism law, and press code, as opposed to the publishing code that banned imprisonment in a 2016 amendment. They have faced charges like “defaming state institutions” or “offending public officials” simply for expressing critical opinions in posts, videos, and even rap songs published on social media platforms. Moroccan civil society recently fought back against the government’s introduction of draft law number 22.20 that sought to incorporate articles on the use of social networks, punishing the spread of “fake news” with prison sentences of up to five years.

Meanwhile, in neighboring Algeria where the Hirak movement has held anti-government protests for over two years, parliament amended the country’s penal code to include an article punishing the spreading of “lies” aimed at “harming state security” with steep prison sentences and fines.

Throughout the protest movement, Algeria’s online space has been steeped in disinformation campaigns led by mostly pro-government Twitter bots and trolls bent on undermining public discourse. In this environment, authorities have weaponized the penal code to punish dissent under the pretense of safeguarding the public sphere from ‘fake news’.

Researchers like Yasmine Kacha have documented dozens of human rights activists and journalists that have been summoned, prosecuted and detained for their online posts as a result.

Despite making democratic gains in the years since its revolution, civil society in Tunisia have faced unceasing attempts to prosecute them for their online speech. A proposed controversial draft law championed as an effort to combat disinformation and “fake news” during the pandemic drew outrage from civil society online. The vaguely worded bill sought to amend articles of the country’s penal code to ‘’prevent attacks on reputation and the spoiling of the democratic environment,’’ with Access Now describing the law’s provisions as “dedicated to muzzling journalists and activists” through intimidation, and limiting access to information critical to “document any rights violations that may take place under these circumstances.”

While the proposal was rescinded, activists in Tunisia continued to fight back during the pandemic, against the introduction of such laws designed to target their online speech, and that have resulted in police summons and arbitrary detentions. Anti-government protests that have taken hold of the country throughout the crisis saw rights groups documenting the arrest of hundreds of protesters for either participating in or supporting the protests in online posts, including bloggers, activists, and dissidents.

Many of Egypt’s estimated 65,000 prisoners of conscience are serving sentences for their online posts as President Sisi’s regime has sought to actively eliminate all forms of dissent. During the pandemic alone, authorities have arrested countless journalists, human rights workers, researchers, and even medical professionals critical of official government pandemic narratives and statistics. Authorities have also increased their blocking of hundreds of websites, using the country’s notorious Press and Media Regulation law and Cybercrime law to censor independent media, block access to information, as well as block social media user accounts for their online criticism.

Throughout the political conflict of post-revolution Libya, the online space has been flooded with disinformation campaigns launched by competing political actors seeking to mislead the public and inflame tensions. The country’s largely unregulated digital space has helped fuel a polarized online media environment, with disinformation spreading predominantly on platforms like Facebook. Netizens and journalists have experienced increasing hostility for content they post online,contributing to a more self-censorship, or the creation of fake social accounts to avoid reprisals from authorities.

As independent social media researcher Khadeja Ramali notes: “This climate of polarization and the fact that most Libyans live in digital echo chambers has hampered the work of initiatives to fact-check and invigorate traditional media.” Ramali also noted the need for an independent, locally-led credible research institution that can effectively document and engage social media companies on how the spread of disinformation on their platforms are a source of instability in Libya.

Indeed, the role of social media companies in censoring critical voices and shaping public discourse throughout the region has not gone unnoticed. Social media companies have increasingly censored content on behalf of governments, banned activists from their platforms, and are slow to take down antagonistic networks targeting users. Dozens of Tunisian activists, journalists, and artists have seen their Facebook accounts disabled with no justification, while Twitter suspended dozens of accounts of Egyptian dissidents.

Rights groups and activists penned an open letter to Facebook, Twitter, and YouTube during the pandemic to voice their frustrations about platform policies and content moderation procedures they say have “all too often led to the silencing and erasure of critical voices from marginalized and oppressed communities” across the region.

So what can be done about social media regulation in a region where free expression is underpinned with such entrenched oppression?

Reversing laws that facilitate censorship, including those governing free speech, as well as the bans on hundreds of websites are certainly necessary first steps in lifting the long shadow of repression that looms over the online civic space, as well as helping to cultivate an engaged, informed civil society that can hold institutions accountable and spark creativity and innovation.

Here, the tireless work of civil society, including rights groups, activists, journalists, and researchers in the region are at the helm of pushing for change. In addition to providing critical insight into emerging issues on the digital front, collective advocacy efforts happening across borders are helping civil society better deal with common threats to the online civic space, including notorious press and cyber laws that infringe on the right to freedom of expression.

Naseem Tarawnah is a writer and editor who is passionate about digital media and content for the Middle East. He is a blogger at black-iris.com and a co-founder of online media outlets like Akhbarek.com and 7iber.com. Follow him on @tarawnah 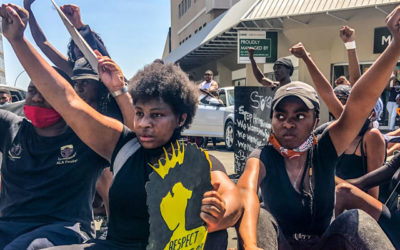 Rejecting the ‘politics of respectability’

Ushering in a new era for the youth by Bertha Tobias It’s a night out with my girls. We’re having a great time, catching up, living and vibing out to Saweetie’s Tap In. I record our rapping along to the part which states “lil waist, fat a**, b**** tap in.” I log on to...