AfCFTA: A game-changer for African media

The AfCFTA came into force in 2019 and actual trading started on 1 January 2021 – delayed by six months due to the Covid-19 Pandemic.

So how does trade impact media policy and regulation?

Essentially it comes down to convergence – the coming together of telecommunications infrastructure and content provision due to technological convergence, in particular the internet.

The importance of electronic communications for trade is internationally recognised. Right from the start, the AU identified trade in communications services as one of the five key priority areas for the implementation of the AfCFTA.

The globe is coming to terms with the realities and challenges of the so-called Fourth Industrial Revolution (4IR) – where services are dependent on digital technologies. This is, of course, recognised on the continent too – AU’s Digital Transformation Strategy 2030 calls for the harnessing of digital technologies to transform African societies and break the digital divide.

The 4IR is not only looking at industrial applications – it is also a feature of newsrooms and the media more generally – no media house relies only on its print or broadcast outlets. Every media house uses its web pages, streaming services, podcasts, video-on-demand, and social media platforms (Twitter, Facebook etc) to great effect – providing a seamless service to media consumers whether they are watching TV, listening on the radio, or accessing services via their mobile phones. Consumers use all or some of the available platforms to access content interchangeably.

This is good news for those who want to see media freedom become more entrenched on the continent. 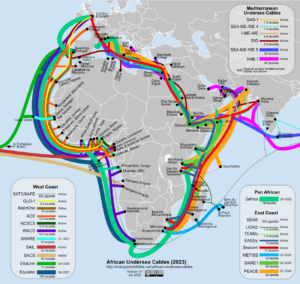 All governments want the upside of 4IR, ie the industrial development, the growth of manufacturing and services sectors, the reduction in unemployment and poverty – the general upside of economic growth and a thriving economy. The bottom line is that this simply cannot happen without access to electronic communications infrastructure and services – as this is how global trade is facilitated. The days of business being conducted by post are so last century.

Much of electronic communications in Africa is based on spectrum use – that is the use of radio frequency spectrum for example, whether for mobile phones/hotspots (to access content and services online), terrestrial or satellite broadcasting. This is particularly slow in areas with poor road or rail infrastructure and where implementation of fixed line communications infrastructure is not possible.

And spectrum use requires formal regulation.

And it is here that a window of opportunity for improved media regulation has opened-up.

Electronic communications are used, not only, for example, in mining and manufacturing, but also in the media, and so they, perhaps inadvertently, also positively impact the media policy environment.

As governments recognise the importance of electronic communications to drive economic growth, so too, the global norms and standards for regulating this sector are forcing adoption. Indeed, many of these standards are already recognised by the AU in various conventions, statements of principle and other international instruments, but have yet to be widely incorporated in national laws.

This is about to change…

In order to drive industry growth – communications infrastructure and services have to be reliable, affordable and resilient – if internet prices are unaffordable to the ordinary person, trade in online businesses/services is impossible to implement.

Similarly, if governments shut down or “throttle” the internet for fear of negative publicity during elections or domestic protests, businesses, industries, indeed all economic activity based on electronic communications grind to a halt with devastating developmental and economic impacts.

This presents all those concerned about media freedom, access to information, freedom of expression and freedom of the internet, with a huge opportunity to use the economic shift to 4IR to garner important national gains in media policy and regulation.

The bottom line is that the AfCFTA’s prioritisation of trade in communications services means that attention will be on how best to facilitate seamless, borderless trade and investment in these services whether at an infrastructure level or a services level. This is simply not possible without ensuring that national regulatory frameworks are harmonised to secure adherence with the basic tenets of successful communications infrastructure and services roll out:

Interestingly, in many international jurisdictions, these principles were fought for and won in the non-online space first, and then the principles were applied online. However, Africa will be unique, in my view, in that the economic force of the communications sector will force through policy and regulatory change which will start with an online focus but, in turn, be applied in the off-line world too.

As governments scramble to take advantage of the trade possibilities of the AfCFTA, they will be forced to turn away from censorious, decrepit media policy and laws (many of which are a hold-over of the colonial era anyway) and will harness the modernising force of the internet, including the traditional media in its embrace.

Justine Limpitlaw – BA LLB (Wits) LLM (Yale) – is an independent communications law consultant and a Visiting Adjunct Professor at the LINK Centre at the University with the Witwatersrand. She specialises in media, electronic communications and space and satellite law. Justine recently published the three-volume second edition of the Media Law Handbook for Southern Africa and is also the author of the two-volume Media Law Handbook for Eastern Africa which includes extensive analysis of broadcasting and online regulatory environments.

By Golden Matonga  Last year, Malawi punched above its weight to take up an envied position on the global stage, when judges of its Constitutional Court nullified the presidential election of the previous year, 2019, that had seen the re-election of President Peter...

By Levi Kabwato The 2019 tripartite elections and 2020 presidential elections in Malawi were defining moments in the country’s history. For the first time, a court annulled election results and ordered a rerun. Only in Kenya had this happened before. Marred by...

By Henry O. Maina The internet is slowly but surely revolutionising societies everywhere and Africa has not been left behind. Internet growth on the continent has been exponential  while it is yet to reach its peak. Increasingly too, many Africans are relying on the...